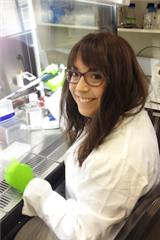 Class of 2006
“Many of my formative years were spent at ISTP, and some of my favorite memories include events such as La Kermesse and the school trips, particularly the one to Montréal and whitewater rafting in Oregon. I had a fondness for Halloween and loved the parades held in the spirit of the holiday. I also remember first learning to use computers in class, which seems so long ago now.”

Anne Thuéry attended ISTP from 1st Grade through 8th Grade. After graduating from ISTP in 2002, she moved to the suburbs of Toulouse, France where she attended the Lycée International Victor Hugo. Anne was part of the International Section and her studies were still in both French and English. In 2006, she obtained her baccaleuréat in sciences with “Option Internationale au Baccaleuréat” in English.

After high school, Anne attended Université Paul Sabatier in Toulouse, where she obtained her bachelor’s degree in molecular biology in 2009, and her master’s degree in bioengineering in 2011. “I moved to Basel in Switzerland for my final year internship at the pharmaceutical company Novartis. I was then hired as a research associate for 6 months. It was during my time at Novartis that I met my partner, who is also working in research.”

Following this experience, Anne moved to York in England for her PhD project, “The Role of Lymph Node Stromal Cells and miRNAs in Regulating Vaccine Efficacy.” The project was funded by the European Commission and was a part of the Marie Curie Stroma Network. She submitted her manuscript in December 2015 and obtained her degree in May 2016.

After finishing her PhD and beginning February 2016, Anne worked as a postdoctoral research associate at the Institute of Child Health at University College London (UCL). She worked on the role of epigenetic alterations in the context of Diffuse Intrinsic Pontine Glioma. Anne also worked as a teaching fellow on the Applied Genomics module that is a part of the Cell and Gene Therapy Master.

“Living in London has been great so far, as there is so much culture and things to do. I believe that my schooling at ISTP has led me to an openness in moving to new places and an ability to easily adapt. ISTP taught me the importance of languages and how being open to them, and to new experiences, enriches interactions. I love languages and even though I never pursued them further, being fully fluent in three languages as well as my capacity in learning and understanding other languages is something I value greatly. I love traveling, seeing new places, and hearing different languages.

I use French, English and Spanish on a regular basis with my family and friends. Being trilingual is something I really value, and I am often able to use all three languages in London as it is such a diverse multicultural city.”

When asked how she is able to balance school and work with her travels, Anne says, “I have been quite lucky to work in countries where the work-life balance is very important. In Switzerland, working long hours meant you could then take time off using the hours worked overtime, and the company takes much effort to keep employees happy. At UCL, I was entitled to 27 days excluding closure days, which makes it easy to travel and take time to live a healthy and balanced life. Even during my PhD, I was able to travel to Morocco and to New England. I think a good healthy work-life balance is crucial to being efficient at work. During my commute, I read or listen to podcasts, and I strive to keep my work and home life separate to not have setbacks at work to affect my personal life.”

As of March 2018, Anne has accepted the Research Information Officer position at the Institute of Cancer Research. “I will be a part of the Research Support Unit working to produce research grants management information and reports, and assist with grant applications in collaboration with other members of the Unit and research staff. I have been looking to move into a support position to further research in this type of role, and I hope that in the future I will have settled into a similar type of position. Ideally, my partner and I would like to settle in a country like Switzerland or Germany.”

Anne’s journey from ISTP to her pursuit of higher education and a fulfilling professional career, as well as her ability to achieve a work-life balance is what we all hope for our students at ISTP. We look forward to hearing more about the incredible work Anne is doing, and wish her the best in reaching of all of her goals.
Back
INTERNATIONAL SCHOOL OF THE PENINSULA
Ecole internationale de la Péninsule
半島國際學校
151 Laura Lane, Palo Alto, California 94303
P: 650-251-8500 | istp@istp.org
©Copyright 2017 International School of the Peninsula. All Rights Reserved.