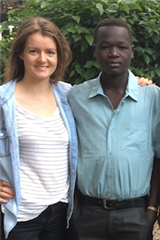 2017 Rising Star Award Winner
MSc, Global Media & Communication
Mary O’Reilly, this year’s Rising Star Award winner, embraces so many of the qualities and attitudes we strive to instill in our students – a global outlook, a spirit of innovation, and a commitment to using her talents to improve people’s lives. Through her work with Not Impossible Labs, Mary is helping to change the world with technology, and is inspiring others to take on problems they might once have considered impossible. Watch the video about Mary.

Not Impossible Labs is a unique startup founded on the principle of “Technology for the sake of humanity.” The company creates low-cost solutions for some of the most vulnerable people around the world, and then uses the power of story to spread their innovations and ideas.

For example, Mary recently traveled to Africa to help with Project Daniel, which took on the challenge of creating a prosthetic arm for a Sudanese boy whose arms were blown off during a bombing of his village. Because Sudan doesn’t have access to advanced medical technologies, the company’s founder had to “hack” a solution by creating a custom prosthesis with a 3D printer, which he left behind in Sudan so it could be used to help other victims of war. Mary and the Not Impossible Labs team then told Daniel’s incredible story through videos, books, articles, and more, inspiring others around the world to use these innovations to solve their own problems.

As a member of the very small team at Not Impossible Labs, Mary has many roles, including business development, project management, and finding business partnerships for upcoming projects. No matter the role, however, she is always inspired by the international outlook and humanitarian spirit she first developed at ISTP, which can be seen in the path she has pursued since graduating from the International Middle School in 2002.

After ISTP, Mary attended Menlo School, and then UCLA, where she majored in Global Studies, including a year abroad in Paris. After working for an international television company and an advertising firm, Mary decided to go back to school, and earned an MA in Global Media and Communications from the London School of Economics.

Mary was thrilled to come to Not Impossible Labs after graduation because “I wanted to find a job with a sense of purpose motivating me. That was a mindset that started at ISTP.”

Currently, Mary is working on building a mobile MakerSpace for the children living in Sudan’s Yida refugee camp. The goal of the project, Mary says, is to “instill that ‘maker mindset’ into kids in the camps, empowering people with the tools to know that even if they have barely anything, they have the capacity to solve problems in their refugee camp, in their community, and in the world, just by learning the basic building blocks of how to make, and how to create things with their own hands.” Mary adds, “ I wish I would have had a MakerSpace when I was at ISTP. I am so happy to hear you are expanding your MakerSpace because it is so important to learn how to make.”

At ISTP, we are incredibly proud to know that one of our graduates is making
a difference in such an extraordinary way. Mary gives ISTP a lot of credit for shaping her into the creative, passionate, and caring person she is today. “Being at ISTP was really the start of that global mindset of learning how to understand people from different cultures and people with different perspectives – that
was invaluable. Being surrounded from the get go by people from different backgrounds was the starting point for me realizing I wanted to work in a job that was global at its core, and to work with people from all over the world and help people from all over the world.”

The path Mary has taken is a perfect example for our students of how they can carry out ISTP’s values in the real world, and we cannot wait to see what she does in the future!
Back
INTERNATIONAL SCHOOL OF THE PENINSULA
Ecole internationale de la Péninsule
半島國際學校
151 Laura Lane, Palo Alto, California 94303
P: 650-251-8500 | istp@istp.org
©Copyright 2017 International School of the Peninsula. All Rights Reserved.