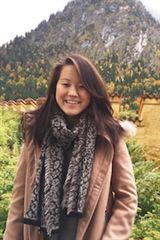 Class of 2009
“Racing banana slugs at La Kermesse, celebrating Chinese and Persian New Years, eating galette des rois, and becoming friends with students from various parts of the world” are a few of Laura Yim’s favorite memories of ISTP.

Laura was part of the inaugural Chinese Immersion Program at ISTP in 1996. After the 5th grade, she attended Notre Dame Elementary in Belmont and graduated from Notre Dame High School in 2009. She accepted the challenge of moving across the country to Wesleyan University in Middletown, Connecticut, where she double majored in government and psychology and played varsity volleyball.

“What drew me to a liberal arts school was the appeal of intimate class settings and an emphasis on academics. Wesleyan, in particular, offers a strong government department and an extensive variety of study abroad programs. I appreciated how Wesleyan students were compassionate, intellectual, and curious - filled with ideas on how to better the world, a global curiosity in which I developed at ISTP.

At ISTP, I had classmates from diverse backgrounds - some that couldn't even speak the same language as me. But we found ways to connect, learn about one another, and form strong lasting friendships. We celebrated holidays from various cultures, which gave me a sense of pride in celebrating my own heritage, and we tried foods from all over the world, which rooted my love for food from a young age. ISTP also helped me find my passion in international relations and languages. Had it not been for ISTP, I probably would not have developed such a strong interest in studying these disciplines in college.”

Laura’s passion for languages continued at Wesleyan, where she took French language and history courses. She had the opportunity to study abroad at a local university in Aix-en-Provence with the Wellesley-in-Aix program. Classes were conducted entirely in French, and she studied alongside French students. “I took Linguistics and Society, Anthropology of Provence, History of Media and Film, and a French language course. I was also fortunate enough to do extensive traveling within France with my program and to other countries such as Croatia, Switzerland, Spain, Italy, Sardinia, Belgium, and the Netherlands with friends. I don’t have many opportunities to practice French these days, so I’ve lost some of the vocabulary I picked up while abroad. But I chat with my host sister from time to time, enjoy watching French movies, and can still pick up a lot when listening to others speak.”

With a lot of class schedule planning, Laura was able to study abroad a second time. She studied in Beijing with the Inter-University Program for Chinese Language Studies run through Tsinghua University. “It was an intensive language course where we covered about 100-150 new vocabulary words each week. I had a 1:1 each day with an instructor and then two classes with two other students. Although I had always been strong in conversational Chinese, I was able to work on a lot of technical vocabulary and reach a point of fluency I had not been able to attain before.”

“I credit ISTP as a driving factor for my decision to study abroad in Aix-En-Provence and Beijing. My time abroad was so enriching and meaningful because of my language studies and exposure to French and Chinese culture at an early age.”

Since graduation from Wesleyan, Laura has been working as a Hardware Program Manager in the Bay Area. She has worked at Fitbit on Advanced Product Development and at Apple on battery technologies and keyboards for portables. “In my current job, I often travel overseas to Asia to manage build events and work with vendors. I frequently use Chinese to communicate and am grateful for being able to speak fluently when needed.”

When asked how she found program management as a career, Laura explains, “I would say that I “fell” into program management. Before graduation, I was dabbling with a few ideas - potentially joining the Foreign Service or working in international business overseas in Hong Kong or Singapore. I had a couple offers abroad and one on the east coast, but decided to come home and look around for opportunities in the Bay Area. I was conducting lots of informational interviews and getting more and more interested in the tech scene. I realized that my experiences in student government and having a liberal arts background translated really well into project management - being able to stay on top of complex schedules, drive mitigation of risks as they arise and provide concise messaging to executive management. I’ve really enjoyed my work so far - the technology space is fast-paced and there’s constantly new areas to be discovered.”

When asked what she took away from her ISTP education, Laura says, “ISTP teaches students to be open-minded and globally aware. Students are taught to embrace what makes them unique instead of trying to fit in. I am forever grateful for the intimate learning environment, passionate teachers, and students that shaped my time at ISTP. In the future, I would love to send my kids to ISTP so they can have the same immersive and enriching experiences that I had.”

Laura currently lives in San Francisco and enjoys traveling, eating and cooking, watercolor painting, hiking, and going to concerts. “I plan to continue in my current role at Apple for at least the next couple of years but am also contemplating going back to business school sometime in the future. I’m also hoping to run my first full marathon next year!”
Back
INTERNATIONAL SCHOOL OF THE PENINSULA
Ecole internationale de la Péninsule
半島國際學校
151 Laura Lane, Palo Alto, California 94303
P: 650-251-8500 | istp@istp.org
©Copyright 2017 International School of the Peninsula. All Rights Reserved.