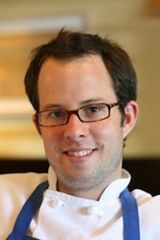 2013 Spirit of ISTP Award Winner
Restaurateur, Chef & Philanthropist
On March 23, 2013, ISTP presented our first ever Alumni Award to alumnus Guillaume Bienaimé. Keep reading to learn about Guillaume's accomplishments and why he was so deserving of this recognition. Watch the video about Guillaume.

The International School of the Peninsula boasts of the successes of every student to grace the grounds of our school. As our alumni base grows larger and older, it is important to acknowledge those who embody the mission of ISTP while also giving back to ISTP, whether through their volunteer efforts or financial contributions.

Guillaume Bienaimé is one such alumnus. A student of ISTP (then Peninsula French American School) from 1987 to 1992, Guillaume acquired more than language during his years here.  He also learned what it means to support others, give back to one’s community, and have a broad view of the world. All these things he carries with him now in his life and career.

Guillaume has also found other means of giving back and paying it forward. Through a personal conversation with a Gulf Coast fisherman, Guillaume learned how deeply the oil spill impacted the people who lived and worked along the Gulf of Mexico’s shores. Feeling a personal connection and deep concern for the future of these people, Guillaume organized Bay for the Gulf in 2012 – a successful food and wine fundraising event.
Yet, through the years Guillaume has not forgotten about ISTP. Between moving to the East Coast, and back to Palo Alto, then back to the East Coast, and then to France – ISTP was always a part of Guillaume.
Since 2008, Guillaume has generously donated gourmet meals to the Soirée du Vin, and his dinners raise thousands of dollars for the Charlotte de Géry Endowment Fund. In 2011, he joined the committee lending his food and wine connections to our growing event.
Back
INTERNATIONAL SCHOOL OF THE PENINSULA
Ecole internationale de la Péninsule
半島國際學校
151 Laura Lane, Palo Alto, California 94303
P: 650-251-8500 | istp@istp.org
©Copyright 2017 International School of the Peninsula. All Rights Reserved.