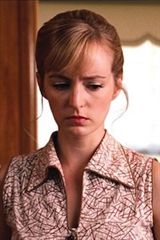 2014 Rising Star Award Winner
Golden Globe Award Winning Actress & Philanthropist
We are proud to present the very first ISTP “Rising Star Award” to Ahna O’Reilly. Ahna attended ISTP from 1992 to 1999. Her French education has proven to be a valuable resource to her throughout her burgeoning acting career.

“I am a firm believer that because of my bilingual education I have an easier time as an actor with dialects—my ear is trained differently. I love language and I love playing characters that come with the challenge of mastering a foreign dialect. I also hope someday to work in French cinema, which of course would be much harder to do if I didn’t speak French.”
In 2011, Ahna played the role of Elizbeth Leefolt in the award-winning film The Help, which catapulted Ahna’s career. In 2013 she worked on nine projects including the highly acclaimed Fruitvale Station, Jobs co-starring Ashton Kutcher, and an adaptation of As I Lay Dying.
However, Ahna’s contributions to her community extend far beyond the realm of acting.
She works closely with an organization called Art of Elysium - a program that brings the arts to children in hospitals. There are hopes to open a branch of Art of Elysium in Palo Alto sometime in the near future. She also works with Unicef Next Generation, Planned Parenthood, and is a passionate supporter of City Year.
In addition, to these efforts, Ahna also supports her alma mater – ISTP. When asked what inspired her to participate in ISTP’s first formal Alumni Giving solicitation, Ahna said, “I feel strongly about giving back to the schools that gave so much to me. I have been immensely blessed to have had such an outstanding education, and it is a small way of giving thanks.”
When asked how her bilingualism has affected her life, Ahna said, “To be able to communicate and understand a different language is something that as a child I took for granted, but as an adult, I am immensely grateful to have the ability to participate in the world in a different way, and with a more flexible ear.”
For someone who has received many accolades for her work on The Help and Fruitvale Station, and had a huge debut at the Cannes Film Festival in 2013, an award from her elementary school could easily be overlooked. However, it holds a special place in Ahna’s heart.
“Receiving this award from ISTP is incredibly special for me. Those were such formative years and to be acknowledged by a community that helped me grow and taught me so much is a great honor.”
Back
INTERNATIONAL SCHOOL OF THE PENINSULA
Ecole internationale de la Péninsule
半島國際學校
151 Laura Lane, Palo Alto, California 94303
P: 650-251-8500 | istp@istp.org
©Copyright 2017 International School of the Peninsula. All Rights Reserved.