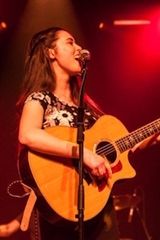 2016 Rising Star Award Winner
Musician, Songwriter and Activist
We are proud to present this year’s Rising Star Award to ISTP alumna Leila Milki. Leila is a successful young singer, songwriter, and pianist whose passion, creativity, and altruistic spirit embody the qualities of an ISTP “Rising Star.” Watch the video about Leila.
While pursuing a career as a professional musician in Los Angeles, Leila has used her art to support the causes she loves, with a thoughtfulness and kindness that is inspiring to see in a person so young.
Leila grew up playing the piano, and always considered singing her hidden talent, until the night of her 8th grade graduation from ISTP in 2007. During the ceremony’s traditional musical finale, Leila was chosen to sing a solo verse of “We are Family” in front of the large crowd, marking her public debut as a singer.
She continued to develop her musical talents throughout high school and college, receiving an ARCT Diploma in Classical Piano Performance from Canada’s Royal Conservatory of Music in 2011, which she balanced with her high school studies at Castilleja School. She went on to graduate from USC in 2015 as a Renaissance Scholar in Communication, with a double minor in Songwriting and Music Industry.
Leila speaks eloquently about the role ISTP played in making her the artist she is today. “I brand myself as a multicultural artist, tapping into the diversity that sets me apart both at an artistic and a human level – I sing in English, Arabic, French, and Spanish. Speaking other languages while growing up shaped and enriched my perspectives, and instilled in me the continuous desire to incorporate these valuable lessons into my performances. Not only has this landed me unique opportunities in the industry, but it has also allowed me to connect to a broader audience who is moved by hearing truth and emotion in multiple spheres of expression.”
Today, Leila uses her rich linguistic and cultural background to write original music, which she performs in established venues throughout Los Angeles. She works as a pianist and background vocalist for other songwriters and bands, and has a job in the acoustic department at Wurrly, a mobile karaoke app. Other professional highlights include writing an original theme song for Boys’ Toys, a documentary film, and being featured as StarCentral Magazine’s Female Artist of the Month.
Leila is also driven to use her artistic talent to give back to social causes that inspire her. She celebrates her Lebanese heritage as a member of LLCS (Lebanese Ladies Cultural Society), where she donates her time performing at their luncheons and galas. She also participates in the House of Lebanon Artist Group, dedicated to the preservation and communication of Lebanese art and culture.
In 2015, “Invincible,” her original song with a message of women’s empowerment, was chosen as the official theme song for the annual Worldwide EndoMarch, a global event raising awareness for endometriosis.
Also in 2015, Leila wrote an original song entitled “Human Together,” for Castilleja’s Arts with a Heart showcase, benefiting Ada’s Café, a non-profit that hires and trains disabled adults. Leila describes “Human Together” as a work that “captures the theme of human kindness, and the decency and empathy of the human race.” This song is emblematic of Leila’s work, which often focuses on positive themes of connection and empowerment.
Reflecting on her creative process, Leila says, “Songwriting is a deeply personal practice that aims to create universal meaning and connection. It is a craft that is enlightened by diverse knowledge and the interaction of multiple worlds into one cohesive, intricate, layered whole.”
She believes that her time at ISTP gave her both the desire and the skills to make connections across cultures, informing her ability to create universally appealing works of art.
More than anything, the bilingual, international education Leila received from ISTP contributed to her rich inner life, from which she draws her artistry and creativity. We would also like to think that in some way ISTP helped instill the confidence and boldness so evident in this young woman’s extraordinary pursuit of her passion
Back
INTERNATIONAL SCHOOL OF THE PENINSULA
Ecole internationale de la Péninsule
半島國際學校
151 Laura Lane, Palo Alto, California 94303
P: 650-251-8500 | istp@istp.org
©Copyright 2017 International School of the Peninsula. All Rights Reserved.