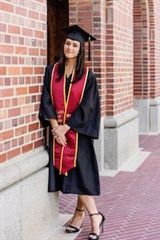 Class of 2012
Simone St. Claire, one of ISTP’s young alumni, shares with us her passion and reminds us of the possibilities available when we seize opportunities to achieve our goals.

“I completed my undergraduate education with a B.S. in Global Health at the University of Southern California, and I am currently pursuing a Master of Public Health at USC’s Keck School of Medicine. I entered college with seemingly disjointed interests in science, human rights, social justice, foreign language, and world cultures. And yet somehow, these interests wove perfectly together in my Global Health major. While at ISTP, I was surrounded by students from across the globe and was able to take part in different cultural traditions and celebrations. USC has one the most diverse student bodies of any U.S. college campus. Global Health is a relatively small major at USC, and most of my classes were in the form of small group dialogue and debate that reminded me of the teaching format that I so much enjoyed at ISTP - one that encourages critical thinking and problem solving.

My major in Global Health was complemented and enriched by my joint pursuit of minors in both French and Cinema Television for Health Professions. I learned about documentary film production and how to use film and entertainment to effectively communicate health messages. This allowed me the opportunity to intern with the USC Institute for Global Health and edit video footage for their Maama ne Maama (Mother with Mother in Luganda) project, a digital storytelling project that allows mothers to share the benefits and barriers to receiving prenatal care in rural Uganda. These videos are screened in clinics in four counties of Uganda and are also available online. My interest in film and health education also led me to an internship with Hollywood, Health, & Society, an entertainment-education organization aimed at incorporating accurate and timely health messages into primetime television. At HH&S, I performed data analysis for their TV monitoring project which investigates how health messages are communicated in primetime television shows and how those messages influence health behaviors of audiences.

My minor in French included a semester of study abroad in Paris, an experience that was far richer and impactful because of my fluency in both French language and culture from my time at ISTP. I also spent a summer semester abroad at the University of Oxford and co-wrote a secondary research paper on mental health implications for child soldiers in post-conflict settings with a particular focus on Sierra Leone.

The summer before beginning my graduate studies in Public Health, I interned at Stanford University School of Medicine in the Global Child Health Program. There I had the opportunity to participate in a qualitative research project called No Means No Worldwide, which is aimed at reducing gender-based violence in Nairobi, Kenya through a self-defense and empowerment intervention in schools. It was my responsibility to investigate middle school aged girls and boys’ understanding of violence and gender roles through thematic analysis of in-depth interviews. Boys were also included in the intervention, as it is just as important for them to understand the value of women and learn how to act as allies in situations of violence.

Currently, I am working at the USC Institute for Global Health to develop a research protocol to gather evidence of the relationship between menstrual hygiene management and school absenteeism in rural Uganda. The results of this study will be used to provide evidence-based program and policy suggestions to local and international collaborators and to advocate for the realization of the right to water and sanitation. I will be going to Uganda this summer to collect this data and hope to publish the findings in a research paper.

Over the next ten years, I hope to work in sexual and reproductive health and rights at the United Nations. Eventually, I plan to pursue a PhD and hope to become a university professor. I love working in education and am so grateful for all that the academic system has done for me, beginning with ISTP. I would love to be able to give that back to future generations.
The opportunity to attend ISTP is the greatest gift my parents have given me. The relationships I have developed with my teachers and friends at ISTP will surely last a lifetime. Education takes place inside and outside of the classroom at ISTP. The precious years I spent in the small, intimate community of ISTP has impacted me in ways greater than I could have ever imagined.”
Back
INTERNATIONAL SCHOOL OF THE PENINSULA
Ecole internationale de la Péninsule
半島國際學校
151 Laura Lane, Palo Alto, California 94303
P: 650-251-8500 | istp@istp.org
©Copyright 2017 International School of the Peninsula. All Rights Reserved.