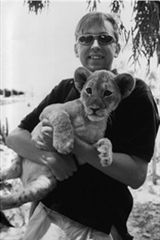 Class of 1992
In September 2005 a sign was posted on the sidewalk easel just outside the Café Presse et Papeterie/Libraire in Jausiers, a small town in the Valley du Ubaye of France. In carefully lettered script, this charming sign announced:

The excitement of a child’s first day at school is the same in every country. But just imagine how momentous such a day can be if it is also the first day of the school! Such was the case twenty-five years ago, when our son Colin’s first day of school was also the first day of the Peninsula French-American School (now the International School of the Peninsula) in Palo Alto, California. While our family was in France this September to attend a wedding in St. Tropez, I took advantage of the occasion to interview Colin, asking him first to reflect on his earliest memories of the school:

“I actually still can remember it, although somewhat vaguely. It really was only one room, and we had Chantal for our first teacher. I remember the night before school opened – we were there with our hose, hosing down the play area outside the room. We had spent a lot of time with other parents and their kids getting the room ready –painting it, bringing in the equipment and just getting everything lined up the week before so that the school could open on time. I remember in particular when the telephone was installed, that was a major advance. A man from the phone company came on the second or third day of school and once we had the phone we felt legitimate. Also, I remember that early on during those first days someone brought in an old record player and from then on we had music and some dancing. Naptime was unforgettable, it seemed so bizarre. They drew all the drapes shut, put down on green cots, and then told us to sleep, even though nobody was ever tired. But my favorite part of all was Garielle’s cooking; the hot lunch program was by far the best anyone ever had!

Only in looking back do I realize some of the really unusual aspects of the new school that all seemed quite normal to me at the time. I remember that Madame de Géry, the Directress, worked from her desk at the back of the classroom for the first year. Later, when it was time to build a library, a wall was erected right down the center of the room to make the new space. That was the beginning of a long-lasting expansion that seems to have continued right up to the present day.”

What aspects of your experience at PFAS have proven most useful to you in your current work at Siemens in Washington D.C.?

“At an early age I learned to appreciate other cultures and other points of view, and this is especially important when you work in a multinational environment on a daily basis. It’s essential that you have an ability to view the world through different lenses.”

Did PFAS encourage you to seek out this kind of career?

“PFAS provided a foundation for exploring other cultures and other ways of doing things. After PFAS, my interest in foreign cultures, especially European, continued to develop. I had the opportunity to spend several summers abroad in high school and college, living in Paris one summer during high school with a family through The Experiment International Living, and spending a summer in Annecy at the University de Haut Savoie when I was in college. Later I spent two summers studying German at the Sparch-Institut in Tubingen. By then I was seriously interested in pursuing an international career. PFAS certainly provided the foundation for this interest. Along the way I had developed an interest in economics and world affairs, and I now thoroughly enjoy my work in Washington, D.C, where I am involved in an intersection of business, politics and global affairs. I use German every day because I work with colleagues in Germany at our corporate headquarters in Munich and I enjoy using my French when the occasion presents itself in business or while traveling in Europe.”

ISTP now offers a track in Mandarin Chinese. Would you have liked that?

“Yes, absolutely! Then I could have responded in the interview for Siemens Magazine in China with my own phrases. For the students now at the school, that provides an even greater diversity and broader global perspective, not to mention that China is an extremely relevant and attractive market, with the promise of every increasing trade. What other languages will the school be offering in the future?”

“In addition to the educational and professional advantages that I’ve already mentioned, it opens doors for many friendships that otherwise wouldn't be possible. For example, last week I attended a wedding in Southern France and spoke German the whole time because the families were German. It was a great opportunity to research real estate possibilities, because some day I would very much enjoy having a pied-à-terre in Southern France. In fact, if anyone reading this has information about small properties near Grimaud, Gassin or Sospel, I’d appreciate hearing from you! My girlfriend is South African, German and British and it’s great that she’s fluent in several languages. Because of her, I’ve traveled to South Africa."

Do you have any advice for parents considering ISTP for their child?

“Just do it! It’s good for the child and it will enrich your whole family’s life immeasurably. There’s nothing like having a kid come home from school and burst out singing Mandarin! My mom still talks about the day I came home from school that first week. We were remodeling our kitchen, and I climbed a ladder outside, looked through the new window, and sang Sur le pont d’Avignon with a nice bow at the end (Les messieurs font comme ça)!”

If, in the future, there were no multilingual schools for your child to attend, would you start one?

“First, I wouldn’t be likely to live in an area that didn’t have a bilingual school. I’m selective about where I live, and would only be attracted to the kind of place that is already well-developed in that regard. If fate threw me into other circumstances and I were forced to move to an area without such educational options, I would certainly set out to correct the situation.”

Any comment for fellow alums you haven’t seen in a long time?

“It would be fun to have a reunion after all these years – maybe it can be the 25th anniversary, a good excuse for a reunion sponsored by ISTP (with Gabrielle’s catering, of course!)”
Back
INTERNATIONAL SCHOOL OF THE PENINSULA
Ecole internationale de la Péninsule
半島國際學校
151 Laura Lane, Palo Alto, California 94303
P: 650-251-8500 | istp@istp.org
©Copyright 2017 International School of the Peninsula. All Rights Reserved.