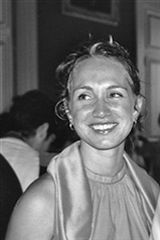 Class of 1999
I was three years old when I first attended the French American School of the Peninsula in the Fall of 1980. Actually, I was three weeks short of four years. Nonetheless, I still remember my first day. A teacher walked up and said, “Bonjour, Sarah!” when my mother and I walked in the door. I was deathly shy. The teacher was pretty and nice, but I wasn’t having it. I was petrified. It amazes me to think that I knew nothing of the language being spoken to me that day. Nowadays, as a teacher of English learners in Oakland, the experience stays with me.

Perhaps I should have known that my strengths would lie in teaching students for whom English is a foreign language. Yet, when I first went into teaching I only knew that I wanted to teach English and History to struggling students in Oakland. After four years, I have come to understand that even though it seems that my students and I are very different, I have more in common with them than they can imagine.

My parents’ propitious decision for me to attend a bilingual school began long before I was born. It began when my Dad struggled in vain to learn Spanish in middle school. It began when my mother spent a college semester in Austria followed by a summer with francophone family friends in Antwerp, Belgium. When the time came for me to start school, it was more a matter of how they would cover the tuition than whether or not bilingual education was an appropriate choice. They knew that having a foundation in the French language would give me a cognitive advantage and give me a more rounded world view than the average American youngster.

I didn’t fully appreciate what it meant to be bilingual as a child. While I enjoyed being able to count in French and sing “Alouette,” it annoyed me when my mother’s coworkers tried to make me speak French. They thought French was so cute coming out of a five year old. But, I didn’t like the attention. Also, I have to admit that it was a little hard for me to go to a bilingual school. Learning in a foreign language isn’t always easy. Like my students, every day I had to cross language and cultural barriers in addition to the normal barriers one crosses in learning to read, write, and do math. When my parents chose to send me to the local public school starting in fourth grade, I again had to make adjustments. My handwriting was all wrong; my method for subtraction used an algorithm my teacher didn’t understand; and I was bored when we studied grammar because my knowledge of language construction was more advanced than my peers. Later on those struggles paid off! I don’t think high school, college, or graduate school were anywhere near as confusing as elementary school! By that time I was used to crossing language and cultural barriers. In fact, I sought out those opportunities.

My early exposure to internationalism propelled me on a multicultural path. It’s hard to imagine my life without the benefits of bilingual education. Research has shown that the brains of children who are bilingual develop differently than those who are monolingual. Our brains are essentially wired for language. So, in college as many of my peers struggled to learn a second language I was busy trying to figure out which study abroad program would allow me to use my newly acquired Spanish skills. I was able to skip a semester of Spanish because I learned it so quickly. Much to my father’s dismay in 1996 I went to Guatemala, Colombia, and Ecuador as part of my Urban Studies major in spite of the warnings of the state department. He should only blame himself for this, though. By that time studying some place as “mundane” as France seemed completely unattractive!

Being bilingual had already helped me gain access to opportunities that many of my peers did not have. One of the most significant opportunities came several years after my education at the French American school. My family lived in Cardiff, Wales when I was in 7th and 8th grades. My school put out a request for host families for French students. My parents enthusiastically announced that there was no way we would turn down this chance at another international connection. Sophie came to stay with my family for three weeks- what a shock to find herself staying with Americans in Wales! Since then we have visited each other every summer. Last summer I was a witness at her wedding in Angers, France. This summer we’ll travel together to Croatia. I don’t think any of the other families from that exchange kept in touch. Yet in our case, our language skills allowed us to communicate with each other’s families and allowed us to get more from our experiences abroad and connection with each other.

In addition to shaping my world view, learning French early gave me a marketable skill. When I attended Punahou School in Honolulu, Hawaii, my teacher put me in touch with younger students needing extra tutoring in French. Later, in college I easily earned a French minor. I subsequently obtained a California teaching credential in French (as well as English and History). Having this skill under my belt has allowed me to pick up classes teaching French. Even though many public schools are cutting French programs, I was fortunate to gain experience teaching French two years ago. Also, this summer, I’m teaching French and Spanish at Head Royce School in Oakland. It’s wonderful to have a skill and interest that I can easily share with others- not to mention that it’s put some extra money in the bank!

In essence, the largest benefit of my bilingual education has been the ease with which I have been able to cross language and cultural barriers. Obviously there are complications. But, unlike many Americans, I don’t get scared by these complications. I have come to embrace them. When I went to college I purposely chose a school with a commitment to internationalism and diversity- Macalester College in St. Paul, Minnesota. I maintained my connection to French by minoring in it and by continuing to visit Sophie. Yet, I also sought out new opportunities to understand other cultures in the world. I traveled to Ghana to study music after I graduated. I chose to work in urban schools with high levels of cultural and ethnic diversity. Two summers ago I traveled with other teachers to Korea and Japan to learn more about those places. Nowadays it is my job to connect with students’ home cultures while simultaneously helping them cross language and cultural barriers and expand their own views of language and culture. In this era of complex international politics and business, can we afford to have education do anything less?
Back
INTERNATIONAL SCHOOL OF THE PENINSULA
Ecole internationale de la Péninsule
半島國際學校
151 Laura Lane, Palo Alto, California 94303
P: 650-251-8500 | istp@istp.org
©Copyright 2017 International School of the Peninsula. All Rights Reserved.