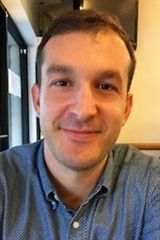 Class of 2004
It is not unusual for ISTP alumni to find themselves comfortable among different cultures. Baris Ungun, who was part of the first middle school class when ISTP was still the Peninsula French American School, shares with us his journey since graduating from the eighth grade in 1999.

“I attended Crystal Springs Uplands School after ISTP. At the end of my first year in high school, my family moved to Istanbul where we stayed for two years. The high school there is similar to ISTP in that it offers an English immersion program with a few classes in Turkish. Before then, I really didn’t know how to read or write in Turkish, but I learned fairly quickly. I think my time at ISTP helped a lot because it becomes easier to master a language after you’ve already done it once.

We returned to the Bay Area in 2002, and I completed high school at Crystal Springs. I was involved in swimming, I played a lot of piano, and then I applied to college. I decided that going away for awhile could be really interesting based on how much fun I had in Turkey. So, in the fall of 2004, I headed to Princeton to study chemical engineering.

While at Princeton, I supported the research of one of my chemical engineering professors, who developed methods for preparing water-soluble coated nanoparticles that trapped oil-soluble particles. A greasy drug that normally would not be able to move in your bloodstream can circulate in that small vehicle. This was good for delivering many types of medications that otherwise would not be available.

Every summer, I returned to the Bay Area for engineering internships, and after college, landed a job at Gilead, a biotechnology company in Foster City. I worked in research and development for 2 years, and during this time debated whether to apply to medical or graduate school. At the time, my dad was active at the Rotary Club of Belmont and introduced me to a dentist who had presented to the Club about his experience with Alliance for Smiles, a nonprofit organization providing free comprehensive treatment for cleft lip and palate anomalies in underserved areas of the world. My dad thought that a trip like this could help me decide what to do next with my career.

The trip was amazing. Our group went to a city in China, home to approximately 3.5 million people, for two weeks where I served as a non-medical volunteer and was put in charge of all the medical supplies. At the airport, I felt like mother duck with her ducklings - carts with over 40 boxes of medical supplies on them. Alliance for Smiles performed over one hundred operations, and I had the opportunity to watch many of them.

I really fell in love with the work that I saw, yet I was not completely willing to give up the engineering research angle. So, I applied into several combined MD-PhD programs including Stanford, UCLA, and Cornell, all of which I was accepted. I had set my sights on Stanford Medical School to not only stay close to family and friends, but also because I admired how closely integrated medicine was with physical sciences and engineering. I knew that research projects at Stanford would intersect all of my interests.

As of January 2017, I am now in my seventh year of the dual doctoral program. I am currently performing research in radiation therapy to identify the optimal position and strength of beams to target and treat a tumor effectively while also avoiding all healthy tissues around it. It is a complex problem that requires the mastery of both hardware and software capabilities. Upon graduating in 2019, my goal from the deep training in the MD-PhD program is to understand both clinical and research worlds - to be able to speak both languages well enough to be a good translator and collaborator between the two.

Looking back at my earlier years, I believe it was foundational and formational to have small classes and close relationships with teachers at ISTP. I think these advantages made school a lot of fun and increased my curiosity. Going between French and English classes made me grasp the idea that there is more than one way to think about and solve problems.”
Back
INTERNATIONAL SCHOOL OF THE PENINSULA
Ecole internationale de la Péninsule
半島國際學校
151 Laura Lane, Palo Alto, California 94303
P: 650-251-8500 | istp@istp.org
©Copyright 2017 International School of the Peninsula. All Rights Reserved.