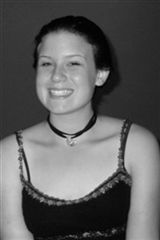 Class of 2002
Katherine Cohn is currently a sophomore at Oberlin College in Ohio and is focusing her education on East Asian studies. After leaving ISTP’s French immersion program, she attended Castilleja where she continued her French studies to the highest level offered ; thereafter she studied Spanish. Between her junior and senior years in high school, she studied art at Parson’s, an art college in New York City. This art education provided Katherine with an opportunity to illustrate a children’s book during her senior year at Castilleja and her freshman year at Oberlin. The author of the children’s book anticipates that Katherine will illustrate three more books.

All of Katherine’s science requirements for graduation at Oberlin were fulfilled when she studied last fall for a semester at sea with the Sea Education Association, an affiliate of the Woods Hole Oceanographic Institute in Massachusetts. Half of her semester was spent on land learning about navigation, celestial reckoning, marine biology, nautical science and history, and oceanography. The second half of the semester was spent sailing a ship from San Diego to Puerto Vallarta. On the ship she participated in conducting scientific experiments, took turns cooking, stood watch over the ship with 23 other students and 8 professional crew members who gradually phased out their work and in the end, had the students completely running the ship.

This year, Katherine is teaching a beginning French class at Oberlin and has extended her language studies to include Japanese. Next year, she will be studying in Kyoto, Japan as a member of the well-respected Associated Kyoto Program.

How did ISTP’s education help you in your life and studies.

While attending ISTP, I took for granted my French language skills. When my mother took me to France every other summer it was fun to play in a new country and it was flattering to be confused as a French girl who knew good English. I never appreciated the ability to communicate as a privilege.

In middle and high school French became more of a hobby because it was an easy class for me. Once I finished all the French classes I could take, I took it as a given that I should take another language; therefore, I began taking Spanish. During high school and the summer before college I became very interested in the East Asian culture; especially art, illustration, religion and economics. This prompted me to learn Japanese and Chinese.

While continuing my French language hobby at Oberlin, I was asked by the French Department to be an assistant teacher since my French was too advance for the Advance Conversational French class. I am now teaching two 50-minute classes each week as supplements to an advanced beginning French class. One of the interesting aspects of this experience is that one of my students is a professor in the music conservatory.

As part of my East Asian studies major, I was accepted to an intensive language studies program in Japan. However, before dedicating the rest of my college career to East Asian studies, I wanted to try something completely different leading me to the oceanography project I embarked on last fall. I lived on a ship, working and sailing for 6 weeks, working in the lab and taking oceanographic samples of all the areas we visited. My Spanish language skills became useful when we pulled into port in Mexico and I could communicate with the locals.

Next year I plan on living in Japan and upon my return to Oberlin, I intend to begin studying Chinese. Currently, I plan on becoming a translator or a lawyer specializing in East Asian law.

What is your view of ISTP’s education and of a bilingual immersion education?

If my parents had not enrolled me at ISTP, I probably would not have pursued languages like I am. The majority of people that I know, who did not learn languages when they were young, had a difficult time learning languages in high school and attempt to avoid language classes in college.

Bilingualism not only helped me in projects that I have already undertaken or in planning my future, but has also helped me in day-to-day activities. For example, it is easier to get along with people when there isn’t the impediment of foreign languages involved. I currently work as a waitress at a Chinese/Japanese restaurant in my college town. The cooks are Mexican and don’t speak English. The owners and managers are Chinese and know only a moderate amount of English and virtually no Spanish. In general, the managers try to communicate with the cooks since the waitresses don’t speak Spanish but communication is an enormous problem. Since I speak Spanish, I can talk directly with the cooks without a translator, making my job a lot easier.

Similarly, when my sailing expedition entered Mexico, we were required to take on two or three Mexican observers to continue conducting experiments. Bringing local Mexicans on our ship added a whole new dimension to the relationships on board. The observers could speak English, but they enjoyed helping people learn more Spanish, and it became a friendly game to teach Spanish to the non-speaking Spanish crew. However, there were some people who had no desire to learn another languages, and I found that unfortunate because it didn’t allow them to forge friendships with the observers.