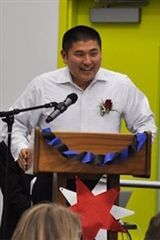 Class of 2004
Kyle Murao graduated from ISTP’s 8th grade in 2000, and his life journey has since taken him to many places. After graduating from Menlo School, Kyle went on to study at the University of Chicago and then in Paris at the Institute of Political Studies (“Sciences Po”) during the 2006-2007 academic year.

Kyle continued, “He wrote a recommendation letter for me because during my sophomore year [at University of Chicago], I took his class. When I told him I wanted to study in Paris my junior year, he voluntered to support my candidacy. I do not think much else needs to be said of the role that ISTP played in giving me a bilingual education.”

When asked how he felt about his time in Paris, Kyle responded, “Well, I know people who have been sent by the University of Chicago to Berlin, to Rome, to London, to Beijing, and of course, to Paris. Amusingly, everyone in all of those other cities wanted to see Paris more. I love it and I think I will eventually go back there — for work, for study, for any reason, really. Not now, or perhaps not even for some time. But sooner or later, the gift that I was given by ISTP, Francophonie, will draw me back to the country.”
Back
INTERNATIONAL SCHOOL OF THE PENINSULA
Ecole internationale de la Péninsule
半島國際學校
151 Laura Lane, Palo Alto, California 94303
P: 650-251-8500 | istp@istp.org
©Copyright 2017 International School of the Peninsula. All Rights Reserved.