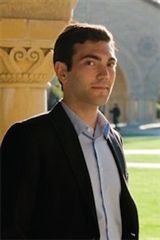 Class of 2005
ISTP alumnus Timon Karnezos’ friends frequently joke that he’s twenty-something going on forty-something. Anyone who speaks with Timon can immediately see his level of maturity and perceive his quiet contemplation of the world around him. His thoughtful and intelligent personality shines through, and according to him, is a direct result of his education at the International School of the Peninsula.

A student in the French Program, Timon found the challenge of a bilingual education to be influential throughout the stages of his life. Timon said that the French system “forces you to find it within yourself to be motivated to analyze things on your own… this mentality of self-motivation was huge for me. That was the most important thing I’ve learned in terms of skills. For example, I’m currently working for a startup in San Francisco and I recently had my first performance review. The VP said that he noticed I spent a lot of time really thinking about things and then coming up with my own criticisms. I don’t think I would have developed that skill so well if I would have gone to any other school.”

Timon reminisced about his time here at ISTP and said, “I enjoyed the family atmosphere at school. I felt like the parents of my classmates were adoptive. It was such a nurturing atmosphere, but at the same time, was very challenging. It taught me a lot later on.”

Also a student at the University of Chicago, Timon recently had the opportunity to study abroad at the famed Sciences Po in Paris.

“A few students who went with me had a different educational background,” Timon explained. “We had all been taught in college that everyone has a say and professors foster discussions. Then, the first day at Sciences Po, we went to a philosophy class and the professor lectured for two and a half hours, without discussion. The other students didn’t feel comfortable with that. The French system teaches you that although creativity is important, there is so much to learn. Your opinion on something you don’t know anything about isn’t as important as listening.”

“French is one of those languages that really forces you to consider the meaning of everything,” he continued. “In English, there’s so many ways to equivocate and interpret meanings of words; your prose can straddle your point without being exceptionally forward about what you’re trying to say. Whereas, in French, it’s very difficult to stand in-between two positions. You have to state something with your position and say something meaningful. The French system taught me to pick a position, and to not let the language impede my ability to make an argument.”

In fact, because Timon was immersed and learned the language at such a young age, he occasionally dreams, writes, and still speaks in French, even though he comes from a Greek and Iranian household, where English, Farsi, and Greek are spoken.

“[French] is from my heart, because of all of the parents and teachers [at ISTP] who were so nurturing. The language became something very emotional for me.”
Back
INTERNATIONAL SCHOOL OF THE PENINSULA
Ecole internationale de la Péninsule
半島國際學校
151 Laura Lane, Palo Alto, California 94303
P: 650-251-8500 | istp@istp.org
©Copyright 2017 International School of the Peninsula. All Rights Reserved.